People are not their religions… 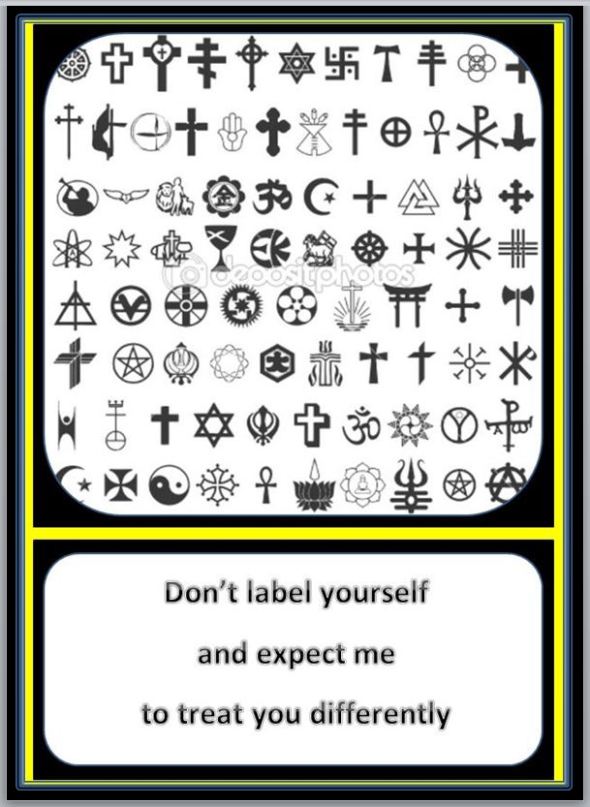 People are not their religions.

Terms like “Christian” and “Muslim” often obscure the contradictions we all know we have. (Thanks to my mate Harsh Mellow for pointing this out)

Most folk only believe bits of the dogma and orthodoxies pushed by religious leaders and leave out the rest. That explains why there are so many different variants of the major faiths.

People are born into families and cultures where certain religions are dominant and rarely choose their own faith – that’s why the so-called leaders are desperate to continue to circumcise etc – they need to put their marks on the young.

The same goes for teaching children myth as history. This is why I’m arguing to Keep Religion Out of Schools (KROS). Religion is more dangerous than sex and we have an age of consent for that.

We have nearly identical DNA to chimps yet we are fooled into thinking we’re different from folk who wear a slightly different symbol round their necks.

I blame the political and religious leaders for this state of affairs. That’s why I say “Don’t follow leaders – they fuck you up!”

Here’s a quote from my satirical novel:

“We’re not saying it’s the new religion. The time of leaders has passed, and the age of governments is ending. We’re not looking to the past but to the future. We don’t need gods and goddesses for we are women – we gave birth to humanity and we’ll solve our own problems.”

This entry was posted on August 21, 2012 by lowerarchy. It was filed under GENERAL and was tagged with atheism, atheist, Christianity, faith, female, feminity, future, Islam, keep religion out of schools, leaders, male, masculinity, men, Muslim, religions, roman catholic church, women.