Keep Religion Out of Schools 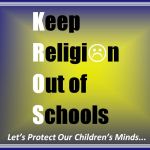 I’ve noticed a worrying development recently in our area (Solihull, UK) – more door-knocking Christian missionaries (Jehovah’s Witnesses, Mormons and some other US group whose name escapes me) and more attempts by zealous folk of faith to convert me – 3 in the last few months.

It’s rather ironic that they should think me a prospect – if they listened to anything I said it would be obvious that I was the last person to approach. These people had a shocking lack of awareness and knowledge of their world – not really surprising I suppose or they wouldn’t believe in a literal reading of the bible.

I shouldn’t poke fun at those unfortunate enough to fall for the scam, but at least I’ll keep it anonymous. Last week a guy tried the old Christian come-on to me in a sauna. Suppressing a laugh. I asked, ‘How can I choose one religion when all faiths claim to be the only source of truth?’

‘We’re the only religion to have a virgin birth,’ he said smiling broadly. ‘None of the others have.’

When I told him it was fairly common in mythologies of the period, he thought for a few seconds and said, ‘But Jesus Christ sacrificed himself for us, was killed in a horrible way then vanished from the tomb and lives forever at God’s side.’

When I didn’t reply he added, ‘If we all lived by the 10 commandments, the world would be a better place.’

So I asked him what the commandments were, but he only knew the first and vague stuff about parents 🙂

I realized then that this sad man needed to bring folk into the church or he would feel the pastor’s displeasure. This kind of Christianity is a racket. Each member of the congregation is expected to give a tenth of their income and bring in new devotees. A bloke like this would always struggle to recruit as he’s not great with people. I didn’t have to be a mind-reader to feel his depression and sadness. But the church teaches God can’t be wrong so it must be the individual who doesn’t have enough faith. The Emperor’s New Clothes. I felt sorry for him even though I loathed his crude attempts to God-me-up.

When he told me that folk were being cured of incurable diseases I realized it was even more serious than I’d previously thought. Who knows how many people were being attracted in the faint hope of a miracle cure for some awful illness. He explained a former thug had seen the light while beating somebody up and now conducted the faith-healing services. Call me cynical, but this has all the makings of a great scam. Gullible folk who know little science are fleeced by ‘ex-criminals’ who claim miracle cures.

Everybody knows that there are no miracle cures, so those promoting them are either deluded or lying. Either way it has to be stopped and soon.

These self-styled churches are invading our communities and abusing our children’s minds with this dangerous nonsense. This is a cult.

So I’m calling for the banning of religion in schools. Teach kids about myths and faiths by all means but inside the framework of ethics, history and social sciences. We protect children from alcohol and tobacco so let’s extend that to mental harms. We rate films and video games as suitable only for certain ages and I’m suggesting the same for religions.

In the UK, when a person is sixteen they can lawfully have sex so I think we should treat religion in the same way. Until that age kids should be protected from adults who we all know cannot be trusted in such matters, especially parents. Likewise for circumcision; when somebody comes of age they can choose for themselves. Anything else is abuse.

Religion if practiced should be a private matter. Let’s give all children the chance to choose what feels right for them, rather than their parents, priests, popes and patriarchs.

So for my part I’m starting this campaign.

Keep Religion Out of Schools