Coming to a church near you soon…

Pastors – they’re only in it for the money, drugs, property, sex and power…

This is what the author has to say: I’m no longer a creationist or a Christian… these videos are some of the reasons why. I don’t really have anyone to talk to about this stuff because my family and friends are all fundamental Christians like I was… so I thought this may be a good way to start discussions and be able to finally get it all out there.

There are many well-meaning creationists who have just been misinformed. It takes a good deal of time to come to a thorough understanding of a major scientific theory; and many just don’t have the luxury of investing enough. They often become the unwitting victims of a few charlatans, and of their own confirmation bias.

It is the evangelical creationist leaders who are the main targets of my criticism. These men and women either should know better; or they are deliberately lying.

In a rare moment of sense, the Department for Education has revised its model funding agreement, allowing the education secretary to withdraw cash from schools that fail to meet strict criteria relating to what they teach.

Under the new agreement, funding will be withdrawn for any free school that teaches what it claims are “evidence-based views or theories” that run “contrary to established scientific and/or historical evidence and explanations”.

10 Things I Love about Evangelical Christians

Liebster Blog Award goes … to me!

Morning Campers! Today I awoke to discover I’ve been nominated for the hugely important Liebster Blog Award and the Nobel Peace Prize. Now I’m a busy man so had to tell the nice Swiss guy I’ll do the dynamite thing next year.

‘And just what is this Liebster Blog Award?’ I hear you scream. Glad you asked. I’ve trawled the net 🙂 and can’t honestly tell you of the award’s origins, but certain details seem to be common to the process. It’s awarded to ‘up-and-coming’ blogs with less than 200 hardcore followers and involves answering a set of searching questions. You also have to nominate others to receive this prestigious plaudit.

‘Liebster’ is German and can be translated as ‘darling’ ‘boyfriend’ ‘sweetheart’ or ‘beloved’. Quite a coincidence as my first name ‘David’ means ‘beloved’ in Hebrew.

I’m honoured to be nominated by a lovely fellow blogger who writes under the nom de plume of “Gaffelioyet”. Gaffelioyet’s Blog has the great tagline – “Broken glass. It’s just like glitter, isn’t it?” I can see the eternal truth in this statement, although the waitress in a Devon ice-cream parlour where I clumsily smashed a Knickerbocker Glory glass certainly didn’t.

Gaffelioyet’s Blog was originally written in Norwegian but has evolved into English. The author is something of a polyglot and is fluent in more languages than the average blogger has followers. This is very handy as she is currently travelling and studying ‘down under’ and obviously has a bad attack of wanderlust or ‘itchy feet’ as they say in shoe shops.

Gaffelioyet’s Blog first caught my eye with a beautiful picture of Brisbane by night and held my attention with her lust for life and irreverent attitude.

She studied drama and theatre for her BA and plans to add to this while away between visiting Vietnam, Cambodia, Laos and Thailand.

She’s also a musician, poet and general woman of letters so please pop in and say hello to her in person.

There are lots of blogs that deserve a mention, but I’m going to plump for “Becoming not Became” for intellectual honesty, explaining about bipolar disorder and amazing writing about desire. I imagine the title is an allusion to Hegel’s famous statement about things being in a constant state of becoming rather than arriving at an end point. Of course it may actually be about the number 11 Outer Circle bus route in Birmingham, UK. As somebody wise once said, “Who really knows anything?”

Anyway, the blogger who writes “Becoming not Became” is welcome to pop in for a cuppa if they’re in the English Midlands – and that applies to everybody reading this that isn’t a troll, ogre or large, dangerous semi-mythical monster. If you are a large, dangerous semi-mythical monster please leave your contact details and a blank cheque at the desk then scram.

Below are the questions set by Gaffelioyet, followed by some of my own for Mr Mulligan (pen name of author of “Becoming not Became”

1. How long have you blogged?

Since 2005 when I was part of the New Civilization Network, however I stopped writing there because everyone was so bitchy 🙂 I developed my blogging skills subsequently on the Moodle system at a couple of local universities, annoying as many pretentious and pompous wannabe writers as possible. This includes myself…

2. What is the talent you are most proud of?

Creativity. I was going to say “pride” but that’s conceited.

3. You wake up in a shaggy hotel in a city of your choice with your best friend and a complete stranger of the opposite sex. There’s a kitchen-battle-axe on the floor with blood on it and an owl in the bathroom. What has happened?

Amazingly this is one of the questions Inspector Marie du Plessis of the Jo’burg Police dept. put to me only last week in a memorable 12-hour interrogation. As I told her then, the owl works for Mossad and follows me every night like a winged vampire. I still have no knowledge of where it roosts each day. My friend is an architect and no doubt picked up the stranger at a conference on how hotels get shaggy in the first place. It’s a mystery to me – I thought they were built of bricks and concrete and stuff.

4. What’s your favourite day of the week?

All of them. As a freethinker, I’ve been trying to deprogram myself out of the idea that different days have different feelings as I realised this is an artefact of the ‘working week syndrome’. However as a shaman and occultist I know that particular days are more suitable for certain magical operations so use astrological and other correspondences to achieve my ends.

5. If you were an animal, what animal would you be and why?

A bear. This is my totem animal and came to me magically on a multi-storey carpark in Birmingham City Centre when under the influence of sacred entheogenic fungi when I was 18.

6. What are you doing for your living?

Writing, marking and critiquing academic essays and teaching this and that.

7. Where would you take me in your hometown, if I visit you?

A multi-storey carpark in the City Centre to take sacred fungi and dance with the ancestors.

8. What is your favourite sound?

9. Do you have a celebrity crush? Who is it?

Groucho Marx – sadly he’s no longer with us, however after ingesting sacred fungi on the top floor of a City Centre carpark…

10. What is the first website you go to when you open your browser?

11. What languages do you speak?

English, some French and Italian to myself. I’m good at accents too.

Right – these are my questions 😉

1. OMG what’s that behind you?

2. What do you do with your hands when you are in bed? Thanks to the late, great Ivor Cutler for that.

3. Can you remember your first and last orgasms?

4. If you were a car, what would you have in your glove compartment?

5. If you had all the world’s religious leaders in a box, what would you do with it?

6. Have you ever had a mystical experience?

7. Have you ever asked a lady her age?

8. Would you kiss the Pope’s ring?

10. What’s the first piece of music you bought?

11. Would you rather meet a devil or an angel?

So my friend – answer those questions and nominate someone else for the award.

I look forward to reading your responses…

Love to all, even evangelical Christians

This is the best anti-religion film I’ve ever seen. Please, please, please watch and copy and spread the word.
As Bill said, “Religions must die so mankind can live…”
Grow up or die… 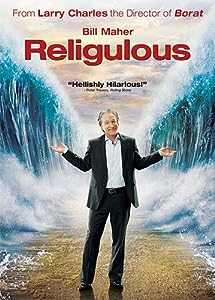 Religulous is an American comic documentary film written by and starring comedian Bill Maher and directed byLarry Charles. The title of the film is a portmanteau derived from the words “religion” and “ridiculous“. The documentary examines and mocks organized religion and religious belief.
http://en.wikipedia.org/wiki/Religulous

When did YOU stop believing in God?

I was in the back bedroom at home and thinking how to get a bike and the idea came to me – why not pray for one?

I considered this and realized that if folk could get things by praying, then everyone would have exactly what they wanted. But it was obvious that wasn’t the case. Therefore, I concluded, there could be no God.

God was just like Father Christmas – something made up by adults.

It was a powerful experience.

Soon after I was at school and a short, balding, fierce, Scottish Presbyterian teacher took over from my normal teacher who was ill. His name was Mr Kerr. His idea for the lesson was to ask kids for types of books and he would locate them in the Bible – his point being that everything was in the holy book. As might be expected from 9-year-olds, the calls from the class tended to be along predictable lines. So sports, history, adventure and suspense were all offered and the teacher fielded each one easily.

Eventually he asked me. “Science Fiction?” I suggested. The cleverer kids in the class laughed out loud, seeing the joke. The teacher scowled at me, tried to think of an answer, then quickly finished the lesson.

Now I have my sights on the outrageous claims of miracle cures for cancer and the like made by the local Renewal Christian Centre. The pastor is the ultimate in slippery salesmen. He was a life assurance executive and then a soccer agent. It’s hard to think of a less spiritual background.

He’s now a governor of a local high school and former TV evangelist. I’ve written to the local paper (although they haven’t printed it yet – more details to follow if I find they’re in league with the self-styled church) explaining what his organisation is doing and blogged about his congregation repeating this nonsense to all and sundry.

I had a run-in with one of his acolytes yesterday at the local gym. Sadly these poor people don’t know their elbows from their arses – which no doubt suits the pastor down to the ground.

We have to fight against this evil because they will try to stop kids learning about science, history and social sciences because a little knowledge destroys their fairy stories. I’m also very concerned about the gender relations these idiots espouse and the awful hatred their “God of Love” engenders.

By the way, does anyone know if Christians mentioned “love” before the 1960’s? I think it’s a new thing. I don’t remember the Inquisition talking about love, although I know The Beatles did.

So readers, when did YOU stop believing in the lie of God?